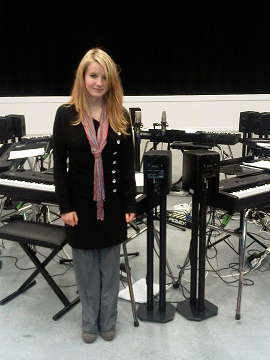 I was born in the early 90’s and as soon as I could walk, I was showing a keen interest in the family piano.

At age 5, my father introduced me to a piano teacher and I began having formal lessons. By age 9 I had a grade 5 merit in piano. My piano teacher retired and unfortunately I could not find a suitable replacement. I continued to teach myself over the following years, and enrolled in music theory classes which took me up to grade 6.

At age 16 I found a new piano teacher and trained for grade 8 piano, in which I got a distinction.

Meanwhile I have had formal violin and jazz piano lessons, and have been playing seasonally in a jazz band and piano duo known as The Jazz Swingtet and The PITS respectively. I have played with these bands for some years now and have travelled as far as Germany on tour.

I have also accompanied a young school string orchestra and performed in a handful of concerts.

I have always been more of a composer at heart, rather than a performer, and so I have composed many tracks over the years, including some paid work and other commissions. I have also entered a few composing competitions, including the Young Composer of Dyfed and Hans Zimmer’s ‘Bleeding Fingers’ Contest.

I have a keen interest in studying. I have 4 A-levels, in Art, Music, Biology and Chemistry. I have taken short courses in harp, guitar, programming, digital recording, stop-frame animation, German and Mandarin Chinese. I attended a year of college studying Theatre, Film and Visual Art, and have gained skills in media studies, play/scriptwriting and particularly video editing. I have a NVQ2 in pharmacy dispensing, and am currently studying towards a BSc in Natural Science, focusing on Chemistry.